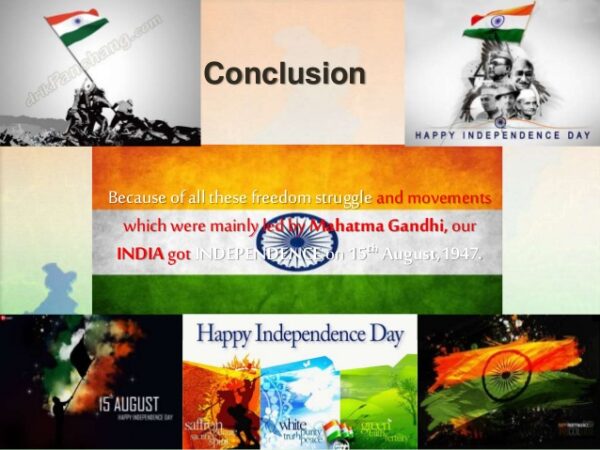 By Rahul Sharma on January 24, 2020
Share this on WhatsApp

Freedom the part of everyone’s life. The life of an Independent is not only freedom. From our childhood, we want freedom we want to walk ourselves, want to speak our own words and even as we grow our freedom rise, it’s demand we want our own rules in our life. Freedom for life has a different meaning but when it comes to the nation than it becomes everything. Freedom of the nation means to create a nation that gives the right to do everything freely in the nation. There are many nations who fought for their freedom, India one of the nation that creates history in struggling for freedom. In this post, you will read the Conclusion of Indian freedom struggle in a short summary with timelines.

India a vast country and has a huge army but then also it has been ruled by different persons and nations. People have to fight for their freedom. The legal rights were not given to the people of the nation. The British ruled India for nearly 200 years and exploited the peoples of India although having numerous army At that time, the question arose, how to start for the independence of the country. India was not able to get the freedom until the peoples get united and fought in an organization. There are numerous organization and army troops formed let’s read about these in brief and also check the conclusion of the Indian freedom struggle.

Important date during the freedom

These dates are the most important dates in the freedom of India. These dates covered the struggle of the nation. Because of these movements india is a free country in the presence. All these best republic day slogans in hindi which is use in present time are the part of revolutionary slogans which is used by our freedom fighters in these movement. The movements started by the nation and each date covers a short note which is written in the summary below the table. Let’s go through the table.

Let’s go through these dates in short summary. These are not dates these are the years of struggle of the nation.

British has started to conquer India during the Battle of Plassey in 1757. The Beitishehsr’s achieve political power in India. The establishment of political power and the company was during the time period of lord governor Dalhousie. During the tenure of Lord Dalhousie, the company almost started to rule entire India. In 1948 Lord  Dalhousie Became the governor-general of India. This was the best time of the British in India.

The very first revolution for freedom was started in 1847. The revolution was started but the unity causes and becomes the failure of the struggle. The main lead was done by the Rani Laxmi Bai the queen of Jhansi. This can be the victory for the nation but the conclusion of the struggle for the nation was only the start. The seed of freedom and feeling of nationalism was uprooted in India.

A new revolution begins with non- violence started by Mahatma Gandhi Ji in 1920. This revolution brings the new twist in the struggle of freedom for India. The Indian people not supported the Britisher’s things and the movement went all over India. The moment ended in February 1922. These movements shook the roots of the British government.

The revolution which almost brings freedom in India. The Quick India Moment was the revolution that gone through a lover India and the longest revolution in India in terms of the time period.

Finally after the lots of struggle the nation got freedom. The conclusion from the struggle was finally built freedom.15 August 1947 India considered itself as the Independent state. The own constitution was written by the state.